Border Patrol agents serve on the ground, in the air and on the water while monitoring activities along the borders of the United States.  Tasked with preventing the unlawful entry of terrorists, criminals, smugglers and illegal aliens, Border Patrol agents engage in a wide array of law enforcement, investigative, surveillance and intelligence roles.  As members of the Department of Homeland Security and the country’s largest law enforcement agency, U.S. Customs and Border Protection (US CBP), Border Patrol agents serve a critical role in defending the United States.

Border Patrol agents man and operate border crossing stations, ensuring that vehicles, personnel and materials crossing at those points are authorized.  Border Patrol agents actively monitor all 6,000 miles of land borders with Canada and Mexico as well as areas of high traffic on the coastlines.  The Border Patrol often collects and acts on intelligence in order to secure the nation’s borders from foreign threats. 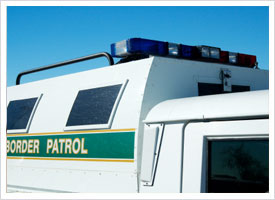 The majority of activities that Border Patrol agents engage in are focused on the detection and apprehension of terrorists, smugglers and illegal aliens through:

An entering Border Patrol recruit may expect between $36,000 and $46,000 in annual salary in the first year.  Within three years, this may rise to as high as $70,000 in annual salary.  Border Patrol agents may receive bonuses of 10 to 25 percent in salary due to overtime or shifts on Sundays or holidays.  Most recruits enter with a GL-5 status, but those with GL-7 have the potential for considerably higher salaries.

GL-7 status is typically awarded to those recruits with enhanced academic credentials like a master’s degree or years of service in a law enforcement or military agency.  As their careers progress Border Patrol agents may be promoted up to Grade Level 11, where annual salaries may top $88,000.

In addition to base and performance based salary, Border Patrol agents are provided with federal health insurance, life insurance and disability insurance.  As federal employees, agents are also awarded four hours of leave per two weeks of employment, up to 13 days a year.  After 15 years of service this can grow to 26 days of leave per year.  Retirement with full benefits becomes available after 20 years of service.

To learn more about how to become a border patrol agent, click here.